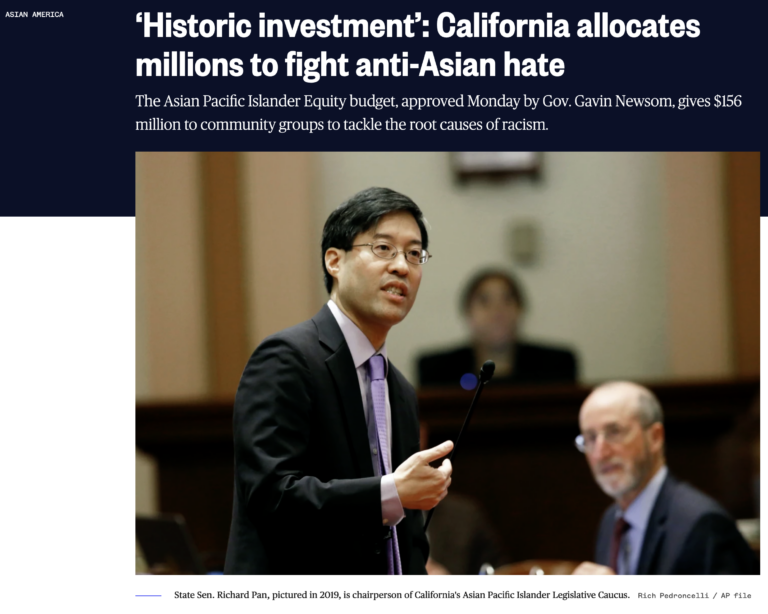 The existing infrastructure primarily supports already over-bloated policing budgets and post-facto “research” about reporting. Victims of hate crimes violence and their families should not have to rely upon Go Fund Me pages to pay for medical expenses. Volunteer forces working to build community-based safety efforts should not have to rely on out-of-pocket donations alone to sustain their work.

While California isn’t the first or only state to pass a funding plan for the Asian American and Pacific Islander community, the package is by far the largest, more than 15 times what New York allocated in its state budget.

Developed by the Asian Pacific Islander Legislative Caucus, the Asian Pacific Islander Equity Budget allocates the money over a three-year period to a host of victim support, mental health and educational resources to tackle the root causes of anti-Asian racism. The victim-centered solutions covered by the proposal stand in contrast to the recent federal hate crimes legislation, which bolstered law enforcement response to anti-Asian violence.

“There’s more to dealing with hate than just going after the perpetrators of hate,” state Sen. Richard Pan, chairperson of API Legislative Caucus, told NBC Asian America. “We want to discourage hate incidents, but we also want to support the people who had to survive it.”

Pan noted that the plan, endorsed by more than 150 Asian American groups, is one of the largest commitments in the state’s history to address the needs of Asian Americans.

“We’re talking about safety that’s beyond law and order. It’s about having safer schools, jobs and businesses in our ethnic enclaves.”

Two-thirds of the package, around $110 million, will be distributed to community-based organizations so they can provide resources to victims of hate incidents. Other grants will cover the cost of legal, health care and mental health services, as well as outreach and public safety programs, such as civilian foot patrols to protect seniors.

In Southern CA, efforts are underway to get a meeting with the head of the Federal Congressional Asian Pacific caucus, Congresswoman Judy Chu: