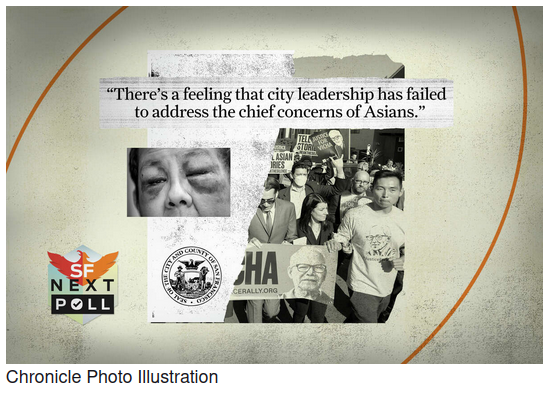 Jade Le has lived in the Tenderloin for 11 years and loves her San Francisco neighborhood. But it’s now in the worst state that she’s ever seen, particularly in terms of safety.

Le, who is Vietnamese and Chinese, said she was assaulted four times near her home during the pandemic — punched in the back of her head while crossing the street, grabbed while walking her dog and grabbed by a homeless person with an exposed penis.

A homeless person in a wheelchair also threw trash at her and called her a “bat eater,” a racist insult referring to the potential origin of the coronavirus in China. All four assaults happened in broad daylight.

“I’m afraid to leave my own home,” she said.

Asian American residents, who make up more than a third of San Francisco’s population, are more pessimistic and critical of the city than other ethnic groups, according to a poll of 1,653 residents by The Chronicle as part of the SFNext project. The results reflect widespread dissatisfaction that helped fuel this year’s recalls of three school board members and District Attorney Chesa Boudin.