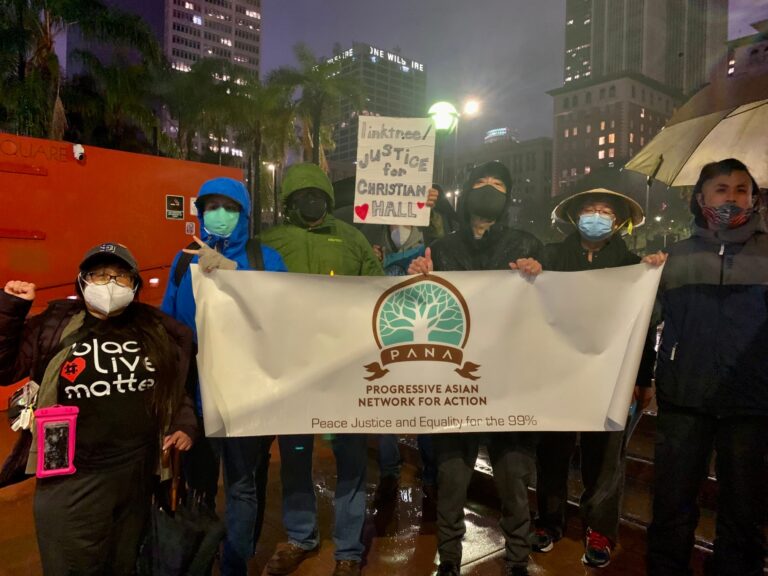 On December 30, supporters of Justice for Christian Hall and all victims of police violence joined together in cities across the country to honor the life of Christian Hall, who was killed while holding his hands up by PA State Troopers in Stroudsburg, PA. It was the one-year anniversary of his killing, Dec. 30, 2020, following Hall’s “anonymous” 911 call reporting a “possible suicider.” The “suicider” was Christian Hall

Read about the case here: https://www.buzzfeednews.com/article/venessawong/christian-hall-police-shooting

More information and links to support the campaign: https://linktr.ee/justiceforchristianhall

Allies from the Anti-Asian Violence community safety street walks efforts were represented: Neighborhood Safety Companions, Progressive Asian Network for Action, Asians with Attitudes and Pan Asian Harmony Society. Thanks to Answer Coalition for organizing, supporters from Party for Socialism and Liberation and Cliff Smith of the Roofers Union Local 36, @taevinmusic and all who came out to support this cause.

In solidarity with Christian Hall’s parents and other victims of police violence, we mourn his loss and continue to push for change. Help honor Christian Hall’s memory by supporting the effort to win justice, and end to lack of killer cop accountability, mental health services reform and support for adoptees.