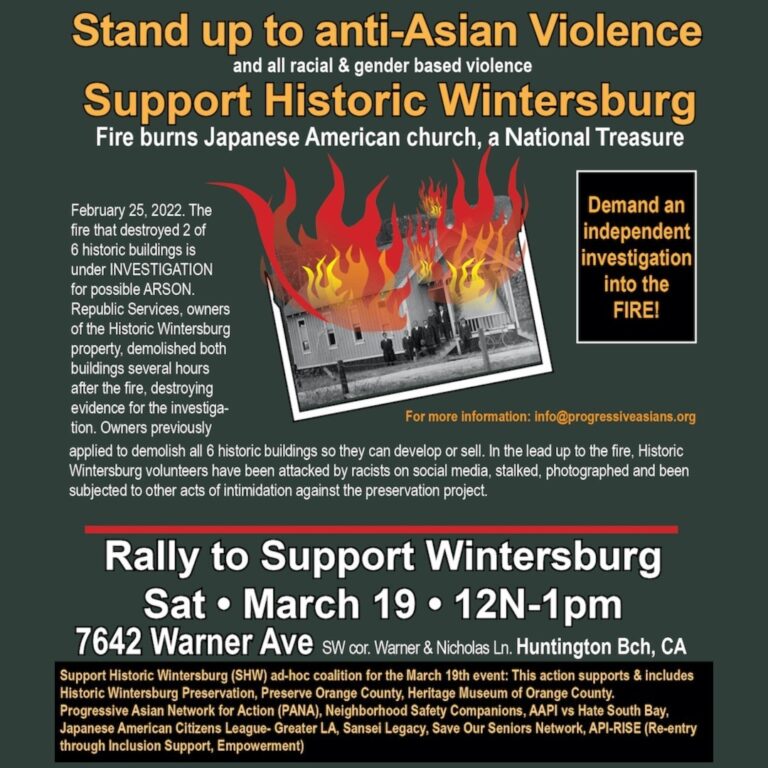 On February 25, 2022, fire destroyed 2 of the 6 buildings at Historic Wintersburg, and is now under investigation for possible arson. Republic Services, owners of the property, demolished both buildings several hours after the fire, destroying evidence for the investigation. They previously applied to demolish all 6 historic buildings so they can develop or sell. In the lead up to the fire, Historic Wintersburg volunteers have been attacked by racists on social media, stalked, photographed, and been subjected to other acts of intimidation against the preservation project.

Mary Urashima, organizer for the project, has requested that organizations and individuals write letters to the Huntington Beach mayor and city council demanding:

Commenters on social media have demanded independent state and federal level investigations, which have been done before, to investigate the Fountain Valley PD in the 1980s and 1990s. (Hayashida, NSC)

This fire happened as hate incidents have skyrocketed across the country. A recent report by the Center for the Study of Hate and Extremism said hate incidents, which include hate crimes, have increased 339% from 2020 through 2021. (Yam)

Attacks against Asian Places of Worship in 2020 and 2021, locally, have been numerous and dramatic.

Causes for anti-Asian violence and vandalism are numerous, but it’s often irrational, where general anger from one situation results in violence against an Asian person or Asian institution completely unrelated to that situation.

The fire at this historic site is happening at the same time that reactionaries are mounting an attack on “Critical Race Theory”, or CRT, in the state legislatures. CRT is a legal theory, but their use of CRT is a code word for Ethnic Studies and accurate U.S. history. It’s a push back against teaching minority histories in the schools. (Sawchuck)

It’s against this ambient and legislative attack on history education that we must consider this fire could have been arson, motivated by hatred or anger at a racial minority.