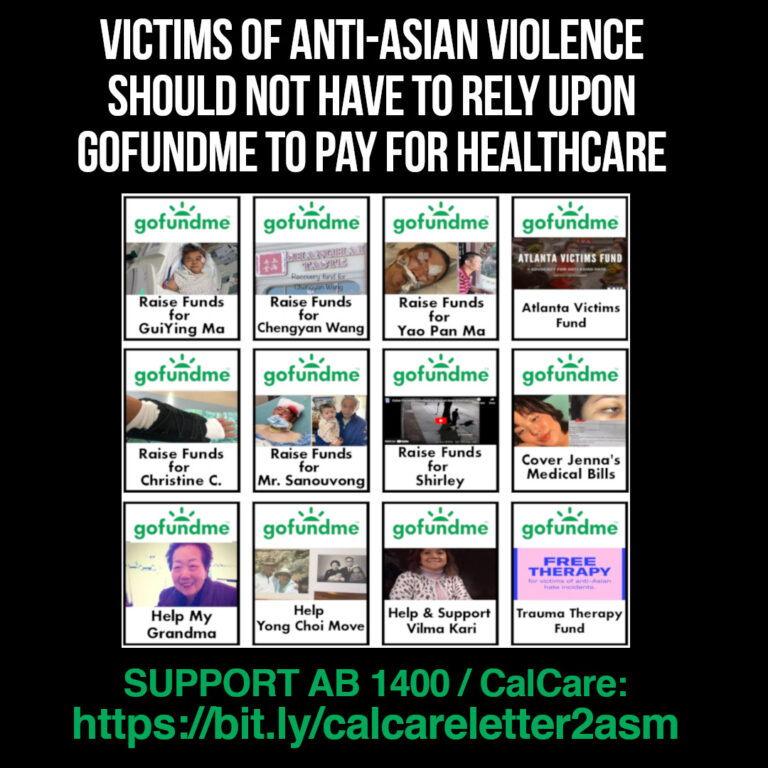 Hate crime violence continued against Asian Americans across the United States in 2021. Because we lack healthcare-for-all, this means many families victimized by Anti-Asian violence are increasingly financially burdened disproportionately.

Contrary to the “Model Minority Myth,” the majority of Asians in the United States are working-class and immigrant. Historically and today, our peoples face racism and inequality in every sphere of society. Scapegoating in the U.S. moves in waves to target various groups at different periods of time depending upon the business interests and needs of the wealthy that control the country. Over the past two years, violence towards Asians, directed particularly towards our seniors, has been widespread.

Racist attacks on Asian Americans have been a national epidemic correlated with both the racist blaming of Chinese for COVID-19 that was led by ex-President Donald Trump as well as ongoing Cold War propaganda in the U.S. economic war with mainland China which continues under the Biden administration.

Especially for those Asian Americans who are part of the nearly 30 million nationally without any health insurance coverage, to have to rely upon GoFundMe pages to provide adequate medical care for Anti-Asian violence is a travesty. Here is a sampling of these efforts of families forced to rely upon the benevolence of the public rather than an equitable healthcare system:

Many members of Neighborhood Safety Companions support efforts to win major healthcare reform. In CA, there is a bill seeking to offset the inequalities built into the current multi-payer, private insurer-controlled system. This bill is AB 1400, which needs to win an Assembly floor vote in January 2022 to advance. Please take action to help the grassroots lobby effort to win AB 1400!

Victims of Anti-Asian violence should not have to rely upon GoFundMe to pay for healthcare!

A street vendor tells our group how he used chopst

Big shout out to Brian of @awa.socal for joining u

Happy Birthday and many happy returns to Brian of

#fbf and a giant thank you to our volunteers for #

Things we saw on our past walk. A rally for worker

Just posting this cuz although it’s good no one

#fbf Giant thanks to @tcbua for the hand sanitizer

We’re meeting at a new location on 5 and Western