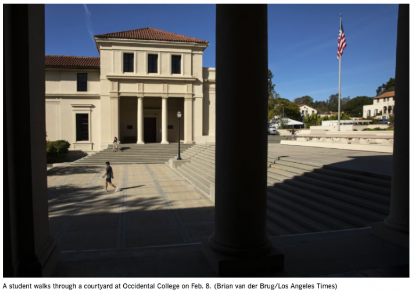 In late 2020, an Occidental College student sent a text message to a friend that read: “all asian people need to die.”

She followed with another text saying Asians are “responsible for the pandemic so they need to die for that too.”

A year later, in October or November, the friend reported the text exchange to Occidental officials and her sorority, setting off a controversy that has roiled the small liberal arts college in Eagle Rock, as students question what they see as a delayed and inadequate response from the administration.

On Tuesday, after a crescendo of complaints, Occidental College President Harry J. Elam Jr. said the student who sent the racist texts is no longer enrolled at the school and has “expressed remorse and regret for her actions.”

Elam also promised to convene a series of campus forums and anti-bias workshops.

Marty Sharkey, Occidental’s vice president of communications and institutional initiatives, could not say why the student left the school. The student was not disciplined over the text messages, Sharkey said in an email.

The student who wrote the texts did not respond to requests for comment.

The events at Occidental have raised questions about how to address expressions of hate at universities, especially when communicated in private conversations.

A campus-wide email from Elam on Feb. 3, in which he condemned the texts but said the college was restricted by a state law protecting 1st Amendment rights at private schools, drew the ire of some students who wanted their peer to be held accountable.

“It angers me that it took the entire student body feeling hurt and harmed” for the administration to acknowledge the messages, senior Shanna Yeh said.

Anaise Nugent, a junior, received the racist text messages more than a year ago.

She initially did not share them because she wanted to give her friend a chance to do better, she told The Times.

But, Nugent said, the friend made other discriminatory and offensive remarks, once saying she thought the recruitment of Black athletes took away spots from others like herself.

“I tried to give her an opportunity to learn from it, and she never did,” Nugent said.

Apparently, Occidental College felt it was appropriate to sit on this for 3-4 months, and this would seem to reflect an attitude of disregard for the lives of the Asian population of the campus and the reality of hate crime violence that has been getting Asians killed across the country. The sad reality is that Asian Americans and other oppressed people know that such things are much more common than what sees the light of day. Most microaggressions are not reported, and most blatant racist thoughts are probably shared among those who share such opinions in private. However, when they are found out, society will have a better chance at moving forward if the dangerous and backwards ideas are confronted and for people that spread them to be held accountable for them. Why would the Occidental College administration not consider a person making such statements a danger? Or, perhaps Occidental College is a clandestine partner in the infamous anti-Chinese “China Initiative” witchunt of academicians?

NSC members would most likely agree that Anaise Nugent did the proper thing. How would you handle such a situation?