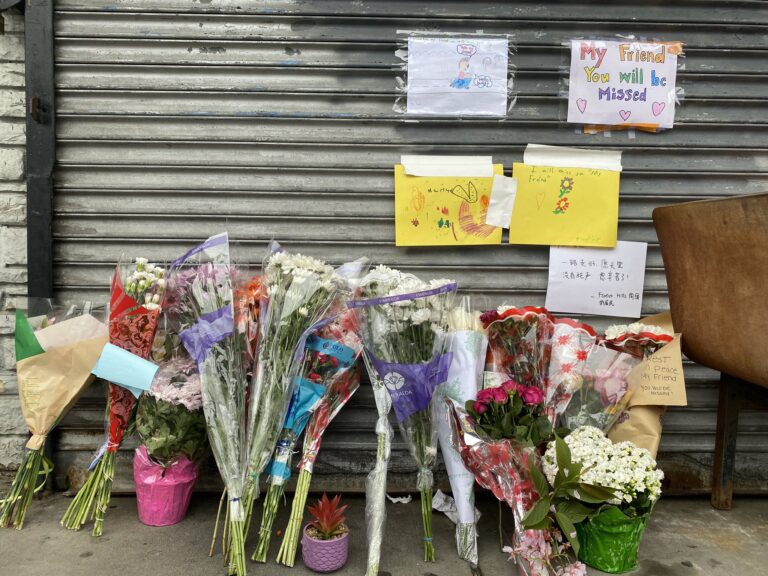 The man accused by authorities of killing a Chinese food delivery man in April was found dead by sheriffs with a gunshot wound to his head Friday, the man’s attorney said.

Glenn Hirsch, 51, was out on $500,000 bail and ordered by a judge to wear an ankle bracelet. When he did not show up to a court appearance Friday, the judge asked a city sheriff to track him down, Hirsch’s attorney Arthur Aidala told NY1.

Zhiwen Yan was killed in the middle of a street while working as a delivery driver in Queens, New York City. (CBS News)

“They told me, ‘Your husband died.’ I told them they are lying. My heart broke into pieces. I told him, ‘Please stand up and come home with me,’” Kun Ying Zhao said.

“You could be two blocks away and he would go, ‘My friend!’ One hand up,” Murray told the Daily News. “He delivered food to us maybe last Saturday. We always order from here. You saw him delivering everywhere. I was up near Kew Gardens and what do I hear? ‘My friend!’ (Heavy)

The news suspected a customer who repeatedly stalked, harassed, and threatened workers, was the murderer. During one incident, he demanded more duck sauce.

Trashy newspaper and website the New York Post reported on the story with this totally tasteless “gag” lede. It made some waves on social media, and the Post has not removed it.

The NY Daily News also used the word “beef” as well, but rewrote it.

Subsequent to these criticisms of cruel, dismissive treatment by the local media, local press have been more sensitive.

Eleven days after the murder, the community held a vigil to demand justice. (QNS)

“The Asian community and our fellow Forest Hills neighbors are appalled by the lack of progress and transparency surrounding this homicide case. Actions speak louder than words, and the actions taken to seek justice for Mr. Yan and his family, who are all innocent victims, do not measure up to how the horrific murder of Mrs. Gaal was handled, which was swiftly and with a sense of urgency shared publicly,” Jess said.  (QNS)

“I want to know why since last November his boss and colleagues have been threatened multiple times and nobody could protect them. I want to know why!” – Kunying Zhao, Yan’s widow (NY Post)

Delivery workers are getting attacked in NYC. A simple search shows numerous stories.

Crimes against delivery drivers increased during the pandemic. (Yahoo)

Delivery drivers face high risk of death, with many deaths due to traffic accidents. (Advisor Smith)

Shortly after the murder, a man obsessed with duck sauce was reported to be a possible suspect. A month later, on June 1, Glen Hirsch, the duck sauce man, was arrested, and indicted on 2nd degree murder. (See definition of murder in the second degree in New York.)

Police revealed that he had a refrigerator full of duck sauce, and his ex had a small cache of eight firearms.

Hirsch had a prior history of threatening workers at the restaurant.

A judge set bail for Hirsch at $500,000 cash, but the District Attorney prosecutor requested that Hirsch be remanded, kept in custody.

According to the NYT, referenced in Wikipedia, New York state is one of the only states that eliminated cash bail without also giving judges the power to hold arrestees who may pose a danger to the public.

To see if the alleged killer is still in jail, see the NYC Inmate Locator Search, and enter 4102200210 into the Book & Case Number.

For the most detailed news about this case, see: The Queens Chronicle, search for Zhiwen Yan.

Demonstration to Demand Justice for Yan

Update: Suspect Released on Bail, Confined to Home and Nearby Area