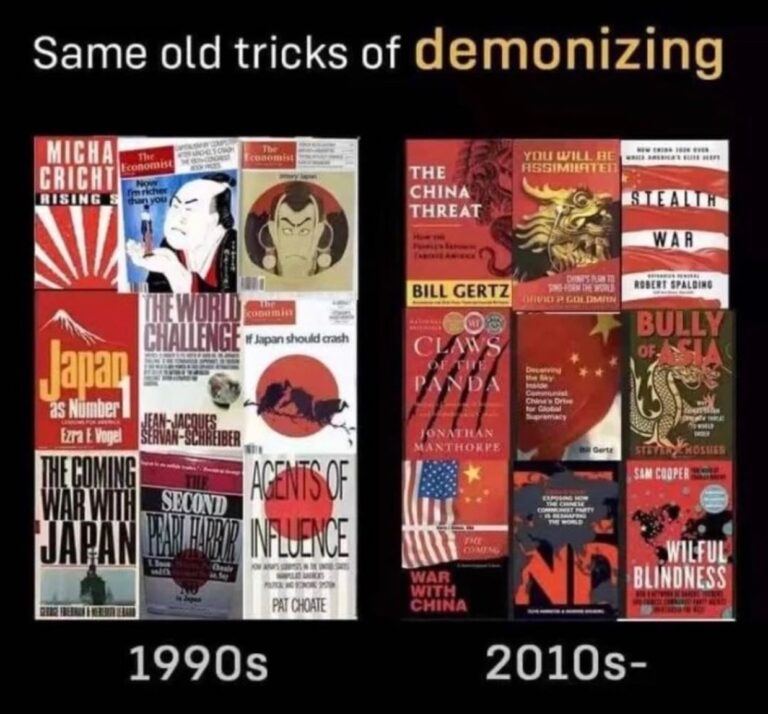 Anti Asian violence has roots in the anti-Chinese immigration movement from the 1860s to the anti-Asiatic movement of the 1920s. They agitated, and succeeded in, stopping immigration from Asia.

Since the early 20th century, Americans and the US government feared losing global economic, military, and cultural dominance to Asian countries. In the 1970s to 1990s America feared “Japanese takeover”, and politicians stoked that fear.

Japan bashing, in books, on television, and in the news, happened daily.

Japan bashing contributed to hostility against all Asian Americans, because we don’t really know the different nationalities, and see Asians as hostile “perpetual foreigners”.

In 1989, in Stockton, California, a man resentful of Asian working class people competing for jobs killed five Vietnamese and Cambodian children. He was pissed about adults, so he went and murdered children, who had nothing to do with it.

In the 2000s, American fear shifted to China, because China grew to the second largest economy in the world.

“Asian American” was Invented to Unite Asians Against Racist Oppression

“Asian American” was invented in the late 1960s, by Filipino, Chinese, Korean, and Japanese ethnic people in America, part of the larger Civil Rights movements, which included Black, Chicano, and Native American groups.

Asians were never alone in fighting for our rights, and we returned the support, in kind, to the other races in solidarity.

China Bashing Puts All Asian Americans at Risk of Violence

The Country Will Try to Separate Us

Different Asian American groups have been pitted against each other, especially during wars:

Unity During the “War on Terror”

During the early days of the “War on Terror”, Asian American organizations reached out, inviting the Muslim American, Arab Americans, and Middle Eastern and other groups into the Asian American coalition. By supporting the politically weak, they built strength together.

The goal was explicit: never again should we have concentration camps for Americans.

#StopAsianHate united all kinds of Asians in America:

The violent people don’t distinguish between us, so we should unite to fight the violence.

We should take that energy to resist breaking unity.

Suppose you’re called the c-word? Don’t be ashamed, and say, “I’m not Chinese,” to dodge the haters. They don’t care that you’re not Chinese; they just don’t like Asians. Don’t wear this:

That shirt should read, “I don’t like being Asian.” It reeks of shame.

Non-Chinese people, of any race, should react to China bashing with a defensive, protective response.

Say that China bashing is going to increase Anti-Asian Violence.

If you need to criticize the government of China, do so, but also explain that China bashing will increase Anti-Asian Violence.

In return, we hope Chinese American people remember and return the favor.